Gillian Rose, Professor of Human Geography and Head of the School of Geography and the Environment at the University of Oxford, has delivered a flagship lecture for The British Academy. 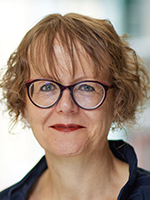 The lecture explored the question: 'How is the sense of everyday urban space being visually mediated by digital technologies?'

"The past decade has seen a huge amount of scholarly work on the digital, the urban, and everyday life. […]. For many scholars, the dynamics of the contemporary world are fundamentally shifting as digital data is extracted, processed and returned in different formats, devices and situations."

"We need to think less about pictures of the urban that represent cities, and more about how digital imaging makes us feel the urban in particular ways."

A recording of the lecture, which was given at The British Academy in Central London on 2 September 2021, has been made available by the Academy.

Gillian Rose is Professor of Human Geography at the University of Oxford and a Fellow of the British Academy and of the Academy of Social Sciences. She is the author of Feminism and Geography (Polity, 1993), Doing Family Photography (Ashgate, 2010) and Visual Methodologies (Sage, fourth edition 2016), as well as many papers on images, visualising technologies and ways of seeing in urban, domestic and archival spaces. Her new book, 'The New Urban Aesthetic: Digital Experiences of Urban Change', co-authored with Monica Degen, will be published by Bloomsbury early in 2022.