Richard Powell took a Double First Class in Geography at St. John's College, University of Oxford, where he was awarded the H.O. Beckit Memorial Prize and a Gibbs Book Prize (BA, 1998). He then held a Canadian Rhodes Scholars Foundation Scholarship, and a University Graduate Fellowship, at the University of British Columbia, Vancouver (MA[Distinction], 2000). Following his return to the UK, Richard held an ESRC/NERC Interdisciplinary Research Studentship and an External Research Studentship at Emmanuel College, University of Cambridge. He was awarded his PhD by the Department of Geography and Scott Polar Research Institute at Cambridge in May 2004.

Richard's research interests encompass geographies of science, political economies of resources, the geopolitics of territory and the histories of the social and natural sciences. His work involves questions at the intersection of the social and environmental sciences and utilizes ethnographic and historical methods. Although his fieldwork has focused on the Circumpolar Arctic (specifically Nunavut, Greenland and northern Norway), Richard has undertaken other research in Denmark, Canada, the US and the UK. Richard's work has been awarded the RGS-IBG Area Prize (2002), the Environment and Planning A Ashby Prize (2007), and the Gill Memorial Award (2013) by the Royal Geographical Society (with the Institute of British Geographers) for 'research in historical and Polar geography'.

Richard convened the UNIQ Summer School for Geography in 2011 and 2012. He was awarded a Teaching Excellence Award 2012 by the University of Oxford for 'Danish Fields: Enhancing Teaching and Learning through the Copenhagen Field Class'.

Richard is from Wakefield, West Yorkshire.

Richard's doctoral research investigated the social practices involved in the constitution of the environmental sciences in the Canadian Arctic. This involved participant observation at a Polar Continental Shelf Project (PCSP) scientific station over two field seasons in the High Arctic. As well as demonstrating the geographies of scientific knowledge at the PCSP research base at Resolute, Nunavut, this research also documented the politics of social interaction between Inuit and scientists, and the labour geographies of logistic personnel involved in field science.

Richard held an ESRC Interdisciplinary Early Career Research Fellowship, 'The sociopolitical, environmental and technological implications of climatic changes in the Circumpolar Arctic for UK Energy Security', 2007-10 (£336,155). This programme of work examined the political geographies of environmental changes and resource extraction in the Circumpolar Arctic and their policy implications for UK energy security. As part of this project, Richard undertook ethnography in Greenland, investigating the epistemic and political development of new hydrocarbon frontiers.

As principal investigator, Richard held an ESRC Seminar Series Grant, 'Knowledges, Resources and Legal Regimes: The New Geopolitics of the Polar Regions', 2010-11 (£18,524; Co-I, Prof. Klaus Dodds). This involved a series of four seminars, and a postgraduate workshop, to consolidate an international network of social scientists working on the Polar Regions. Richard held a RCUK/ESRC Global Uncertainties Impact Support Grant, 'Impacts of Polar Geopolitics for UK Policy in the Arctic and Antarctic', 2013 (£5,000) to develop the policy-impact of these activities. More details about this can be found on the project website.

Richard has always been interested in the histories of the geographical sciences, and the relations between disciplines. He is examining the importance, since the late nineteenth century, of Arctic societies and environments in these debates, and has been awarded a British Academy Small Research Grant, 'Towards an historical geography of Arctic exceptionality: Franz Boas, Knud Rasmussen and geographical practice', 2014-15 (£9,900), and a grant by the John Fell Fund, University of Oxford, 'Greenland and theories of environment and society: a scoping study of the archives', 2013-2014 (£7,450). This is supplemented by an American Philosophical Society, Library Resident Research Fellowship, 'Geography, anthropology and the Arctic: Franz Boas and disciplinary debates about field practice', 2014-15 (US$2,500) and a Leverhulme Trust Research Fellowship, 'Holistic Greenland? Science, politics and a geographical imagination' (£44,824).

During 2016, he is investigating the relations between the geographical sciences and disciplinary understandings of the geo during the twentieth century. He holds an Independent Social Research Foundation (ISRF) Mid-Career Fellowship, 'Environment in the geopolitical imagination? Knowledge formations in Geopolitics, International Relations and Geography after 1945' (£59,967). He has been awarded an ISRF Residential Research Group grant to convene an advanced, innovative, interdisciplinary workshop, 'New Earth Thinking? Investigations of the Geo across the Social Sciences' at Girton College, Cambridge in August 2016 (£10,000).

Richard's research career has been supported by a range of other awards and funding from many sources, including the Royal Society, London, the International Council for Canadian Studies, Ottawa, and the European Science Foundation, Brussels. Richard has been a Visiting Researcher at the Geological Survey of Denmark and Greenland, Copenhagen, and at both the Department of Geography and the Institute of Canadian Studies, at the University of Ottawa.

Richard organized a HPGRG/RGS-IBG Workshop on 'The Geographical Canon?' in Oxford, June 2012, and Guest Edited the resultant Volume 49 of the Journal of Historical Geography in July 2015. He edited a Virtual Issue of Transactions of the Institute of British Geographers, 'Geography and Politics Redux?' in July 2015. Together with Ian Klinke, he organized a Workshop on the 'Geographies of "Area": politics, places and disciplines' in January 2015, and is editing the proceedings for Political Geography.

Richard recently completed his second term as Chair of the History and Philosophy of Geography Research Group (of the RGS-IBG), 2010-14, where he previously served as Secretary and Postgraduate Liaison Officer.

Given his expertise, Richard is regularly consulted by policy-makers and the media in the UK, the European Union and North America about the future of the Polar Regions. Most recently, he appeared as an Expert Witness before the House of Lords Select Committee on the Arctic in October 2014.

Richard is regularly called to be an international expert by organisations such as the Research Council of Norway, the Netherlands Organisation for Scientific Research, the Estonian Research Council, the Academy of Finland, the Norwegian Ministry of Foreign Affairs, the British Academy, the AHRC and the Leverhulme Trust. He sat on the Evaluation Committee for the 'Public Outreach Grants Program' of the Social Sciences and Humanities Research Council of Canada (SSHRC), 2010-12. Since June 2010, he has been a member of the ESRC's Peer Review College. Richard currently sits on the Editorial Boards of Transactions of the Institute of British Geographers, 2013-18, and Historical Geography 2014-19.

In December 2016, Richard was awarded a prestigious European Research Council (ERC) Consolidator Grant (€2m, 2017-22) for ARCTIC CULT - Arctic Cultures: Sites of Collection in the Formation of the European and American Northlands. This five-year project involves research by Richard, four Post Doctoral Researchers and a Project Assistant at museums, archives, libraries and repositories across Europe and North America, as well as in Greenland and the Canadian Arctic. It brings repositories in colonial metropoles into dialogue with sites of collection in the Arctic by tracing the contexts of discovery and memorialisation. In doing so, it aspires to a new understanding of the consequences of forms of colonial representation for debates about the Circumpolar Arctic today.

For Prelims, Richard lectures for the 'Geographical Controversies' paper and offers lectures and practicals about Qualitative Research for 'Geographical Techniques'. Richard has also organized the first-year Human Geography fieldwork in Oxford.

For the Final Honour School, Richard designed, convened and lectures on the 'Environmental Geography' foundation course. He also gives lectures for the 'Space, Place and Society' foundation paper and the 'Geographical Research' core paper. Richard convenes an FHS option, 'Northlands: Peoples and Politics', based on his research (taught jointly with Prof. Judy Pallot).

Richard designed and led the new FHS Human Geography Field Class to Copenhagen in 2013. He was part of the Course Review group for 'Geographical Research' in 2012, and was asked to lead the course redesign of 'Space, Place and Society' in 2014.

At Mansfield College, Richard and his colleagues are responsible for teaching students across the entire breadth of geographical topics for the Preliminary Examination and Final Honour School of Geography.

Richard convenes and teaches on the 'Science and Politics' core course for the MSc (Nature, Society and Environmental Governance). He teaches an optional MSc Elective on 'Greenlandic Cultures', and together with Prof. Andrew Barry, co-taught the MSc Elective, 'Politics of Oil and Gas'. He has lectured on Arctic governance for the MSc (Environmental Change and Management). As part of the core 'Research Skills' training for all MSc and DPhil students, Richard teaches Qualitative Research, particularly ethnography and archival research.

Richard is currently External Examiner (Humanities and Social Sciences) for the MPhil Polar Studies, University of Cambridge, 2012-14, and is regularly asked to exam and assess doctoral theses in Oxford and much further afield.

Richard supervises a group of doctoral students and mentors a number of postdoctoral fellows and early career scholars working on issues related to his research. He welcomes enquiries from individuals wishing to undertake doctoral or post-doctoral research in the following, or related, areas -- geographies of science; geopolitics and political geography; political economy of resources (especially oil and gas); ethnography; indigenous rights and governance; social and political theories, particularly with respect to scientific knowledges; environmental geography; historical and cultural geography; histories of geography and related disciplines; and the Polar Regions (especially the Canadian Arctic and Greenland). 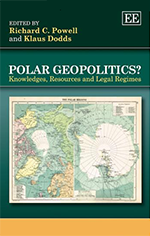