He previously directed the MSc in Nature Society and Environmental Policy (2007-2013) and prior to these appointments, held Senior Research Fellowships with the Environmental Change Institute and the Skoll Centre for Social Entrepreneurship at the Said Business School. Paul transferred into academia from a successful career in conservation management and policy. He has consulted for a wide range of inter-governmental and non-governmental organisations and was Indonesia Programme Coordinator for BirdLife International (1991-1997). He started his career as a local government countryside officer developing new urban conservation initiatives in Manchester and Shrewsbury (UK). His research interests focus on the geographies of conservation governance and focus on three themes: i) theory development to support better conservation practice, ii) the governance of conservation over space and time, and iii) conservation governance futures. This research is informed by long term interests in protected areas, wildlife trade, conservation policy history, science-policy interfaces and NGO, accountability and legitimacy.

While at the School of Geography and the Environment, Paul led an interdisciplinary Conservation Governance Lab working to generate novel and creative insight to help conservation assure its relevance and impact in the 21st century. The lab's identity is founded on the belief that important applied insights lie at the interfaces of the natural and social sciences and of theory and practice. It aims to generate richer conceptualisations of the actor, policy and management landscape of conservation, how this varies across time and space, and how elements of this might respond to future social, technological and environmental change. A developing research theme of his lab concerns the implications of new technologies and the practices they produce for the future of conservation.

More specifically, Paul's current research and writing focuses on three themes i) rewilding and creating the institutional spaces for the development of policy to support functionalist approaches to conservation gain policy support, ii) the implications of new technological forces for conservation science, policy and action, and iii) how to recapitalise conservation and expand the range of financing sources. He has a leading role on two major research initiatives. The first is the development and application of culturomic ('big-data') techniques to generate indexes of the 'culturalness' of species and sites. He has published a series of papers with Richard Ladle and Ricardo Correia that introduce and demonstrate the potential of culturomic techniques. Now their technique is validated, this research is moving to the design and development of new generation conservation decision support techniques. The second project, is investigating ways in which the value - existing and potential- of investments in protected areas can be protected and enhanced. Together with colleagues in the Smith School and Brazil he published a new framework for Protected Area Asset Stewardship in 2017. This project is now researching and developing applied applications of this framework.

In addition, Paul is actively engaged in rewilding policy. In 2016 he published an agenda for European Rewilding and conducted research with Frans Schepers (Rewilding Europe) on creating a policy space for rewilding within EC nature institutions. He was appointed to the RE board in April 2017.

Paul is also active in science communication, particularly in the area of biodiversity science-policy interfaces and new media. He established the Freshwater blog in 2009 and regularly writes for on-line media such as The Conversation and Geographical magazine.

MSc in Biodiversity, Conservation and Management

For a full list of Paul's publications please see ResearchGate. 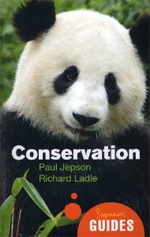