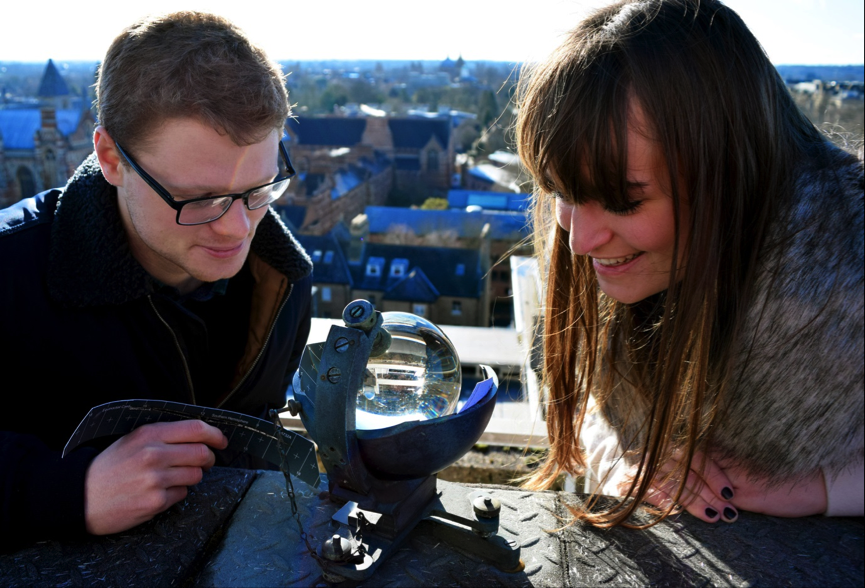 Current RMS Met Observers Callum Munday and Amy Creese record the hours of sunshine at the top of the Dept of Engineering Science.

Oxford University's Radcliffe Meteorological Station is the longest running continuous weather station in the UK. On 15 May, the Met Office will present an award to the University 'in recognition of 200 years of continuous climate observations at the Radcliffe Observatory, Oxford'.

The Station, based at Green Templeton College and maintained by the University's School of Geography and the Environment, holds the longest series of temperature and rainfall records for one site in Britain, with daily full records from 1815, and less frequent observations dating as far back as 1767.

Phil Johnson, Regional Network Manager for the Met Office, will present a commemorative shield to Richard Washington, Professor of Climate Science at the University's School of Geography and the Environment. Also at the presentation will be members of the Royal Meteorological Society, who are visiting the Observatory that day as part of the bicentennial celebrations.

Professor Washington said: 'We are delighted that the Met Office should recognise the University's contribution in this way. It provides a moment to pause and remember those with the foresight to embark on extraordinary efforts to record the weather each day so long ago - long before the justification of climate change was to hand. Ours is an old planet yet one with a very young observational record. But without those 200 years of data, nature, and the way we are influencing it, would be so much harder to understand.'

Phil Johnson, Regional Network Manager for the Met Office said: 'Weather observation sites are crucial to the way that we observe and record the climate around the UK. Our climate analyses would not be possible without the long-running, high-quality individual station series such as the Radcliffe Observatory, and we are delighted to present the School of Geography and the Environment at Oxford University with this long service award. These observations are used in a variety of different ways, including supporting automated observations, making historical records and contributing to climate change calculations. We rely on skilled observers at sites such as Oxford to provide us with accurate data.'

The current observers are doctoral students from the School of Geography and the Environment, who visit the station once a day, every day, to read the thermometers, check the rain gauge and estimate cloud cover. They also check the atmospheric pressure on a barometer inside the Observatory, and note the sunshine, wind-speed and visibility from the top of the Department of Engineering Science. Since 1925, eye observations have taken place every morning at 09.00 GMT. UK weather stations report a mixture of snapshot hourly observations of the weather, and daily summaries of the weather known as climate observations. The limited nature and frequency of the observations at the Radcliffe weather station means they have little value for short-range weather forecasting. However, the station provides valuable long-term data for climate research.

Changing weather patterns in Oxford can be tracked by comparing recent data with the long-term averages. The combined winter rainfall total for December 2013-February 2014 was a record-breaker as the wettest ever of any of the three winter months since full records began in 1815. January 2014 was the wettest of all winter months with rainfall of 146.9mm which, although below the national figure, was nearly three times the month's long-term average in Oxford of 52.9mm. Last year was also Oxford's warmest since 1815, part of a very warm trend since 1990, with September 2014 being the second driest on record. The average annual temperature for 2014 was 11.5°C, 1.8 degrees higher than the 200-year average of 9.7°C, a significant difference in weather terms.

The observations were originally made at the Radcliffe Observatory but the weather station is now located in the grounds a few metres away. The first Radcliffe Observer was Dr Thomas Hornsby, Savilian Professor of Astronomy at Oxford, who in 1768 requested funds for an astronomical observatory from the Radcliffe Trustees at a cost of Ł30,000. He had a small rectangular room on the top of the Tower for astronomical observations, where he erected a rain gauge, thermometers, and wind-speed recorder on its small, flat roof. Although his weather records were done to correct star observations, his meteorological observations became increasingly important for their own sake. Hornsby's surviving meteorological records include fragments of a weather journal with entries for various dates between 1760 and 1804. On 27 January 1776, it was so cold he read the temperature 12 times instead of the usual three, noting in his journal that 'this day wine keg in my study froze'. The lowest air temperature he recorded in Oxford that day was about 6°F, which is just below -14°C. Some of the instruments he used are preserved in the Oxford Museum of the History of Science.

As part of the celebrations Professors Chris Folland and Tim Burt delivered talks on long-period temperature and precipitation records in the British Isles. You can listen to, or watch, their talks below.