The use of animated mapping is now being widely used by television and animators to visualize election results in eye-catching and informative ways.

Pioneering work on the use of cartograms in general elections has been an area of work examined by Professor Danny Dorling for more than 20 years. 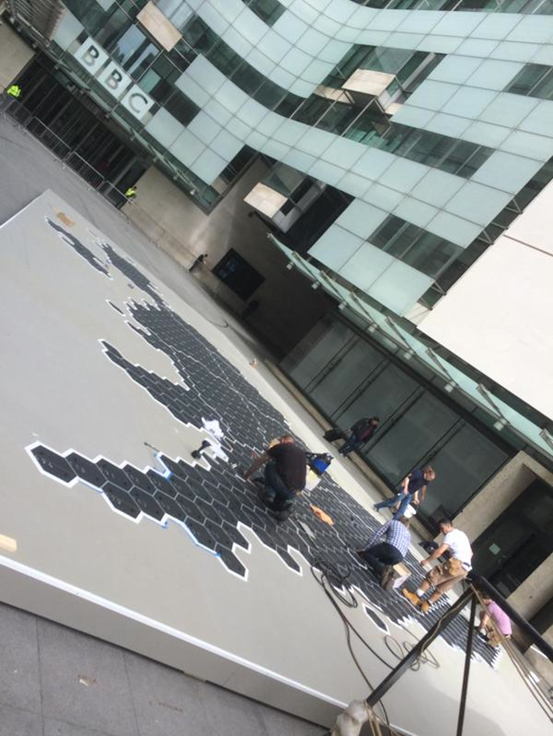 Back in 1994, Danny Dorling wrote an article for Geographical Magazine entitled: Animated mapping: bringing elections back to life. In it he suggests that computer graphics can make the mapping of election results eye-catching and informative. He proposed the use of animated cartograms, using an equal land-area projection for constituencies, displayed by hexagons in party colours. The cartograms are now widely used across news and media channels to display live election results and the use of hexagons have been adopted by many, including the office for National Statistics to display constituency data.

"Hexagons are nice shapes and the average constituencies does have almost six neighbours," said Danny, who first introduced the concept in a paper 'Area cartograms: their use and creation' published in Concepts and Techniques in Modern Geography in 1996.

Earlier this week, BBC technicians were spotted building a version of one of Danny's early maps outside of New Broadcasting House.

"It's great to see these cartograms being used by news channels on election night. They offer novel and eye catching ways of displaying the data and trends to the general public," said Danny. "Although they still haven't quite got to grips with all the computer animation ideas I proposed in the 1990s." One of his more radical ideas included the use of a three dimensional triangulated swingometer which could be drawn on a cartogram to display the change in voting patterns between consecutive elections across up to four leading parties. We have yet to see evidence of more complex cartograms and graphics in the mainstream. However, only recently have more than three parties mattered.

The study of cartograms and visualisations is a valuable area of research within the School of Geography and the Environment. Recent work by Dr Ben Hennig includes a visualisation project with the Office for National Statistics to display key statistics, which demonstrate life in constituencies around the country. The maps provide the public with key data in their locality. They offer a simple way to see patterns in the data and might be a useful tool for voters deciding which way to vote in the 2015 General Election.