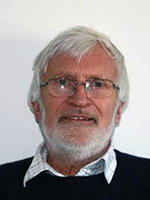 "It's all about the rocks!" So, Mike would gently direct students and reticent researchers to the unerring importance of groundwater for society's sustainable development in the past, present and future.

Mike's passion for sustainable and equitable management of groundwater led to dramatic and internationally-significant scientific discoveries that were recognised by the O.E. Meinzer Award (2009) as the first British recipient, and the Whitaker Medal (1999). Seminal scientific advances on controls on water quality in regional aquifers, recharge over time and space, and the origin of mineral and thermal waters were published in over 150 scientific papers and books.

After an outstanding career spanning 35 years at the British Geological Survey (BGS), he joined Oxford University as Research Director of the Water Research Centre at the School of the Geography and the Environment, and a member of Christ Church. He continued to advance global groundwater science and management, notably in the UNESCO G-WADI programme, but also focused on developing and launching a novel and interdisciplinary MSc in Water Science, Policy and Management with Rachael McDonnell, Michael Rouse and David Johnstone. Launched in 2004 it is now in its 11th year with over 220 alumni from 52 countries. Mike's classes have launched many successful academic and practitioner careers inspired not only by the quality of his scholarship but his celebrated field courses to Dorset and the Ebro basin every year.

The MSc course has been the touch-paper for a renaissance in water research in Oxford now linking over 70 faculty and research staff in the Oxford Water Network established in 2009. Mike has contributed to innovative, interdisciplinary water science including his significant inputs to new programmes on Improving Water Security for the Poor and Groundwater and Poverty. Both programmes reflect Mike's significant and enduring personal contributions to improving the lives of rural people in Africa and Asia not only through his world-leading science but also his personal commitment, including over a decade as a trustee of Wells for India, which has transformed the lives of thousands of poor people in Rajasthan.

Above all, Mike has been an inspiration to all the staff and students who have had the privilege of working with him over his 13 years at Oxford University. We celebrate his significant achievements to educating the next generation of global water leaders and establishing a legacy for the next wave of water research at Oxford. We are greatly shocked and saddened by his sudden death and our sympathies and thoughts are with Kathy, his four children and his six grandchildren.