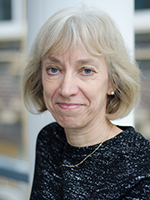 Heather Viles is Professor of Biogeomorphology and Heritage Conservation and a Fellow of Worcester College. She was educated at Great Baddow Comprehensive School and the Universities of Cambridge and Oxford, and held a Post Doctoral research post at UCL before starting work in Oxford. Within the School of Geography and the Environment Heather has served as Director of Undergraduate Studies and Director of Research. She is also Co-Director of the EPSRC Centre for Doctoral Training in Science and Engineering for Arts, Heritage and Archaeology (SEAHA) which is based at UCL, Oxford and Brighton. Heather has been a Vice-President of the Royal Geographical Society (with IBG) and Chair of the British Society for Geomorphology, and is currently on the executive committee of the International Association of Geomorphologists. She has just been awarded the Ralph Alger Bagnold medal by the European Geosciences Union for her contributions to geomorphology.

Heather's research focuses on weathering, the interactions between biological and geomorphological processes, and the deterioration and conservation of historic building materials. She runs the Oxford Rock Breakdown Laboratory which brings together researchers from many different disciplines to investigate the breakdown of rocks and building materials. In recent years, their research has been funded by many bodies including EPSRC, AHRC, NASA, the Esmee Fairbairn Foundation, the Leverhulme Trust, Proceq and English Heritage.

Heather wishes to thank Professor Sarah Whatmore, the outgoing Head of School, for her wise and effective leadership of the School over the past three years.