Prof. Danny Dorling calls for more to be done to narrow the inequalities in wealth in Britain today 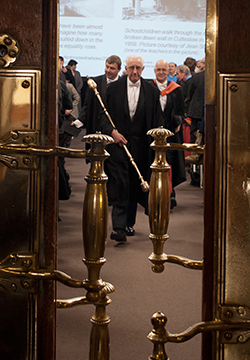 In the prestigious Examination Schools of Oxford University, among an invited audience of over 400 and under portraits of King George III and Emperor William II, Professor Danny Dorling presented his inaugural lecture as Halford Mackinder Professor of Geography on 'Geography, Inequality and Oxford' last night.

His talk outlined how geography is increasingly important for revealing inequalities - over the last third of a century, inequalities in health and wealth have been rising and rising fastest in the last 5 years. The last period in recent history when we enjoyed relative equality was back in the 1970s - the time when Danny himself was living and schooled in Oxford.

The focus of Danny's lecture was around the growing disparity between the richest 1% in Britain and the bottom 99%. But why does it matter whether someone else has a yacht? It matters because these inequalities play out in other aspects of our society, affecting the cities we live in, the education, health, housing and standards of living of the rest of us. As the 1% grows, young people, especially families are finding it harder to maintain the standards of previous generations.

Soon a quarter of children in Britain will live in homes owned by a private landlord. They were not the intended occupants of private rentals - the surge in availability of rental accommodation was intended to increase mobility for younger professionals and students. Instead more and more families with children have to live in these insecure households where rising rents are repeatedly forcing families to move homes. 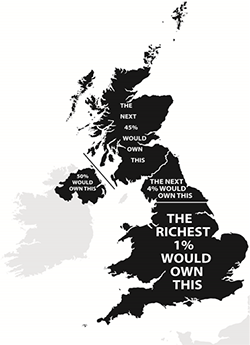 In the last 5 years, British landlords have increased their net wealth by Ł245 billion as they collect rent and use the income to buy more homes. At the same time, average British mortgage holders have seen their equity fall by Ł169 billion. But this is not the case in all countries. There is a growing contrast with countries such as Switzerland and the Netherlands in which the inequalities in wealth have continued to reduce steadily over the last century. Dorling argues that this is because Switzerland and the Netherlands have progressively reduced the amount of income taken by the top 1%; bankers are paid on average half what they are paid in Britain, where half the liquid wealth is owned by the top 1%.

And as the economic inequalities rise in the UK, our education has been shown to suffer. The UK is slipping down the international league tables in terms of proficiency in numeracy. Our young people are now less numerate than their contemporaries in almost all other OECD nations.

So while we sat in the grandeur of the Examination Schools, Danny concluded that today's Oxford students couldn't hope to fit within the shrinking elite of the top 1% in the same way that previous Oxbridge generations could when the elite were a larger group. Instead, today's young people are likely to see their standard of living fall while they work harder to meet the rising rental payments that line the pockets of the 1%. The challenges we are left with are to try and stop the inequalities from growing even more and to find new ways to better control the richest people in our society.