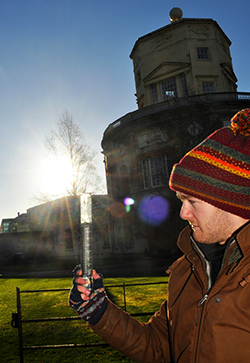 Dr Ian Ashpole measures the 10.0mm of rain that took January's total to 146.9mm and into the record books at the School's Radcliffe Meteorological Station at Green Templeton College

Weather observers at the School of Geography and Environment confirmed that last Friday's afternoon rain has led to this January being the wettest since records began in the 1760s. The heavy rain meant that the total recorded at the University's Radcliffe Meteorological Station overtook the previous record in January 1852 of 138.7mm.

January 2014's rainfall of 146.9mm is almost three times the average for the month of 52.5mm. Dr Ian Ashpole, the Radcliffe Meteorological Observer at the School, said, "It has been the very high number of 'very wet' days this month - rather than a few monster ones - that has led to the record. Oxford residents have had to endure consistently miserable weather conditions all month, with only one rain-free day."

Since records began in the 1760s only 14 out of nearly 250 Januarys have had more than 100mm of rain. "This really shows how extreme this year has been," said Dr Ashpole.

As well as being the wettest January it has also been the wettest ever of the three winter months (December, January, February). The previous record was December 1914, when 143.3mm fell.

A further extreme statistic is for the period from 18 December when the rains were setting in. The following 45 days recorded 231.3mm at the Radcliffe, over 20 mm more than the next highest 45-day period (1st December onwards, 1914, 209.4mm). There are over 9,000 such winter periods in the observatory record.

Alongside all the rainfall, this January has also been very mild, the 15th warmest on record.

The Radcliffe Meteorological Station, maintained by the School of Geography and the Environment, possesses the longest series of temperature and rainfall records for one site in Britain. These records are continuous from January 1815, with irregular observations of rainfall, cloud and temperature from 1767.