Sanitation still a challenge in informal settlements in Africa 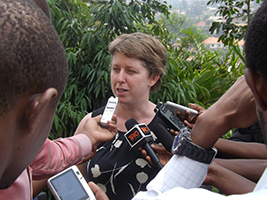 A preliminary report on sanitation in three African cities by the Institute of Policy Analysis and Research, Rwanda, has received widespread coverage by the Rwandan media and was the headline news story on Rwandan national TV in January.

The report draws on the findings of the 3K-SAN research project led by Dr Katrina Charles on sanitation in Kigali and Kisumu in Kenya and Kampala in Uganda, and reveals that informal settlements in these three cities still present challenges in sanitation. The report highlights that causes of poor sanitation are not only due to logistics, but are more complicated and include other factos such as tenancy, age, gender and financial capacities.

The 3K-SAN project aims to identify and evaluate strategies for catalysing self-sustaining sanitation chains in low-income informal settlements in African cities. Identification of commonalities and differences between these areas is being used to develop broader best-practice guidelines for comparable interventions in similar settlements throughout sub-Saharan Africa.

Dr Katrina Charles is an environmental engineer with a passion for improving access to safe drinking water and sanitation. She joined the School as Departmental Lecturer and Course Director of the MSc in Water Science, Policy and Management in October 2013, having previously been a lecturer in environmental engineering at the University of Surrey.