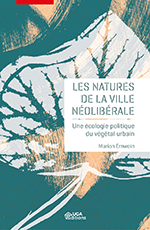 Urban green spaces are increasingly coming alive, whether through "zero pesticide" campaigns, ecological management practices, or urban biodiversity policies. They are increasingly participatory, too, exemplified by the proliferation of community gardens and other collective experiments with plant-growing in cities.

In her book Les Natures de la Ville Néolibérale (The Natures of the Neoliberal City) (UGA Editions, 2019), SoGE Departmental Lecturer Marion Ernwein examines the ways in which neoliberal urbanism shapes these evolutions, their promises and their potential. The book discusses the role played by logics of eventification, neomanagerialism, and public-private partnerships in delineating the contours of the living city, and the role that human and nonhuman dwellers can play in shaping it.

The book draws on several years of research with policy-makers, service managers, municipal employees, gardeners and activists in Geneva (Switzerland) to make a compelling case for critically engaging with the political mechanisms through which the natures of the living city are defined.

The book came out in September 2019. A book launch took place at the Maison Française in February 2020, sponsored by the Economy and Society and Technological Life research clusters.