See our featured past events and links to outputs and videos online below. Visit our Oxford Talks archive for the comprehensive list of events added to our Oxford Talk collections.

For information about our forthcoming events, seminars and talks go to our Oxford Talks webpage. 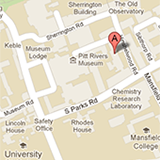 Please note there are no car parking facilities at the School.